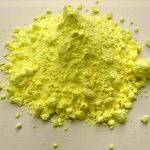 I make my own Sulphur soap. It helps reduce my skin plaques / psoriatic lesions. I seem to have no allergic reaction to the Sulphur in my soap.

When Googling, you can find people talking of their experiences with Sulphur from back as far as the early 1800s.

Excerpts from some of the ‘better’ websites which I have visited – Sulphur – in the US it is called Sulfur.

Mud baths containing sulfur, often called balneotherapy, can help treat skin disorders and arthritis. Balneotherapy is one of the oldest forms of pain relief for people with arthritis. The term “balneo” comes from the Latin word for bath and means soaking in thermal or mineral waters. Some people claim these baths are useful for allergies and respiratory problems. But there is no scientific evidence for these uses.

People also apply sulfur products to the skin to treat acne and other skin conditions.

Sulfur baths, and other methods for applying sulfur to the skin, may help treat Psoriasis.

2) Psoriasis – The European Federation of Pharmaceutical Industries and Associations (EFPIA)

Mild to moderate skin plaques are traditionally treated with topical formulations containing either dithranol or coal tar and colloidal sulphur.

Coal tar has anti-inflammatory and anti-scaling properties that are useful in treating plaque psoriasis. Crude coal tar in a soft paraffin base has been traditionally used, and tends to be a smelly, messy treatment which usually has to be made up in a hospital pharmacy.

While the therapeutic benefits of sulphur and mineral water have been promoted in Europe for centuries as a therapy for arthritis and psoriasis, American physicians are less enthusiastic, citing a lack of scientific studies proving long-term benefits for the treatment of arthritis or psoriasis, an itchy, scaly skin condition affecting approximately two percent of the U.S. population.

Fort Myers dermatologist and plastic surgeon Dr. Charles Eby, M.D., 75, pulls up his sleeve to expose a ragged patch of psoriasis on his right arm, commenting, “Nothing’s worked on mine. You’ll find lots of anecdotal reports, but very few clinical trials’ on sulphur water’s effect on psoriasis”, he adds.

……psoriasis is an auto-immune skin disorder and currently there is no cure for it. But sulfur powder seems to be one of promising part in the psoriasis treatment solutions. It is quite interesting to look at its healing properties from the point of view of tradition Chinese medicine, which defines it as the “fire extractive” and it is first mentioned in the beginning of the famous Nineteen Medicaments of Mutual Antagonism. The reason behind this is twofold. First, it has a short-term effect on heating up the body and regaining strength quickly right after the oral administration. No wonder it was once used as the basic ingredient in making pills of immortality by Taoist alchemists of ancient China. And secondly, herbalists consider it as hot in nature, which is really intuitive since it is a volcanic mineral that forms during volcanic eruption. And it deserves that name because in theory it contains the powerful heat of volcano. On the contrary, the psoriatic lesions can be deemed as ice. As a result, the ice of psoriasis can be melted by the fire of sulfur. Of course this is not a scientifically proven theory but at least it provides another perspective…….

One Reply to “Sulphur”